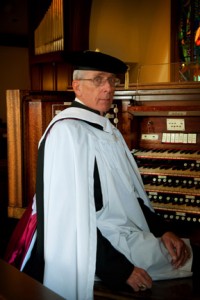 The Organ Guild started out as a small group of volunteers whose task was to design, build, and install a new organ in the soon to be renovated worship space at Holy Nativity Episcopal Church.  Work on the Sanctuary, and the organ began in January 2008 with the arrival of the 1955 Wicks Console, purchased from a church in Virginia.

The work progressed rapidly, and the Organ was installed and ready to play for Easter Sunday of that same year.  Organist and retired IT professional, John Durgan oversaw the project.  The early small group of volunteers swelled in numbers, and was about twenty by the end of the project.

Because the project is ongoing due to normal maintenance and upgrading, it was decided to make the Organ building volunteers a permanent organization of the Church, and one of its ministries.  The organ Guild was formed as a fellowship, and now numbers about 28 in members.  Our current Master is John Barnett, who started in the project at the beginning.

Click here to a video about our wonderful organ!